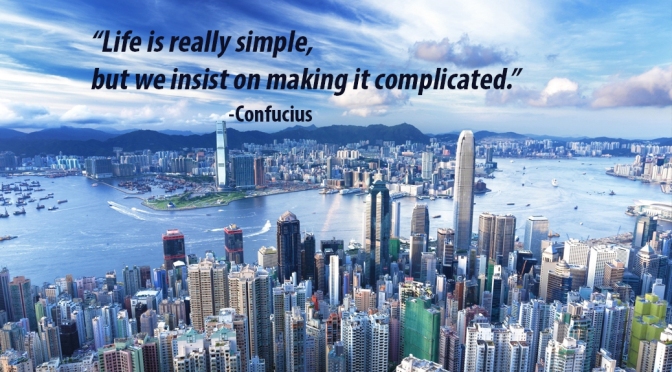 Through experiences with friends, high school, college, jobs, more jobs, and a career, I’ve learned some valuable things. Have you heard of Keep It Simple Stupid, or KISS? Simplicity truly is king, and it’s been lost on this generation. In this two part post, I’ll go over simplicity in Work, and in Play.

I remember in college my friends and I had visions of grandeur. Every juicy idea we had was the big one, the idea that would turn us all into multimillionaires overnight and before we knew it we’d be throwing Gatsby style parties and posing for the cover of Forbes. We’d talk about going international, but would always gloss over the parts about going local. We praised all these bells and whistles our company would offer alongside our flagship product. Unfortunately those bells and whistles didn’t yet have a bike.

Before you set out to conquer the world, conquer your neighborhood. Whatever it is you or your business does, whether it’s brewing beer, grilling burgers, or producing cars, come up with a money maker or winning strategy, lock it down, and hone it in.

The 9th Symphony wasn’t Beethoven’s first and only draft. There was the iPod before there was ever an iPod 2, 3, 4 or 5 – and it sucked. But it sold. But what did Beethoven and Steve Jobs have in common? They were both willing to put their nose to the grinding stone.

Your first restaurant’s menu won’t be a mile long. Your first invention won’t have a million features. And that’s fine! The big players in any industry didn’t spring up overnight. The good stuff takes time. It requires practice, experience, trial and error, success and failure. Allow yourself to be small and nimble in the beginning of any new venture. This gives you more agility and flexibility when it comes to reacting to unexpected situations or a changing market.

Don’t worry if your product only comes in two colors. Sell a few, save up, regroup, and when you are able to, come up with a bitchin’ third color.

So whether you are an entrepreneur or work for the man, expect to struggle for a little while you find your bearing. We don’t live in a vacuum, so be prepared to put in your dues and work well with others, as well as learn from them.

Keeping it simple is a good idea. But first, try starting simple and see how that goes.