I started watching the CW show Arrow during season 3, several years after it debuted in 2012. From the start I thought it looked interesting but thought it might have been a spin-off of Smallville, a show which was way too campy for my taste.

After having finished up Orange is the New Black, I needed another show to binge watch and stumbled on this. Despite the Abercrombie and Fitch advertisement, this show is actually pretty cool and fun to watch, and it has a fairly dark tone to it at times, which I appreciate in show about a guy who hunts down criminals at night.

Episode after episode I watched and watched. Season 1 done, Season 2, gone, I love that dang show, it’s almost like I’ve seen it before…. It’s because I have. As awesome as this show is, it’s a total knock off of Batman. Given, the Green Arrow/Oliver Queen and Batman/Bruce Wayne actually do live in the same fictional universe in the DC comics, and have shared the pages before, the writers at CW really took some liberties with the show.

Arrow isn’t so much a show about Green Arrow, as much as it is a show about Batman that they call and dressed up to be like Green Arrow. Instead of Gotham City, it takes place in Star City, and instead of Bruce Wayne, it’s about Oliver Queen. Beyond that, Arrow is the story of Batman.

The Arrow show seems to have taken the last 30 years of Batman lore from Frank Miller to Christopher Nolan to New 52, tossed it all in a blender, baked it in the oven, and stamped a green arrow on it.

In the Nolan series, Bruce Wayne spends years away from his home town in the seedier places of the world, gets martial arts training, comes back home, assumes control of his family’s business and birthright, and driven by the death of a parent, takes on a secret identity as a crime fighter. Our hero’s first major costumed exploit is stopping a former friend and colleague turned villain from using WMD’s to destroy his city. The villain is defeated, but massive damage has already been inflicted on the city, and the hero spends the duration of his costumed career dealing with the aftermath.

That was the premise for Batman Begins.

That was also the premise for Arrow.

Gotham City and Star City, completely different right? Wrong. Both are wrought with corruption and crime, and both seem to have geographically isolated neighborhood where the poor and disenfranchised live in seemingly third-world conditions. In Batman Begins, this part of Gotham is called The Narrows. In Arrow, it’s called The Glades. 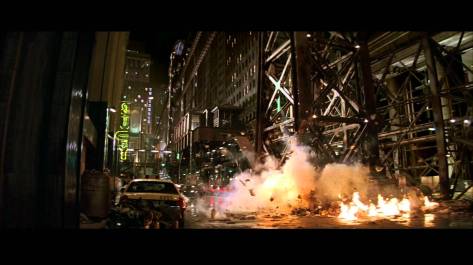 Just as Wayne Enterprises is the economic heart and soul of Gotham, Queen Consolidated is for Star City, and the respective families are well known, and tantamount to local royalty.

Throughout the series a recurring villain has been Count Vertigo. Completely changed from his comic book character, the series adaptation couldn’t be any more of an obvious knock off of Cillian Murphy’s portrayal of Scarecrow/Jonathan Crane in the Nolan Batman series. A physically un-intimidating character who uses his advanced knowledge of the mind and bio-pharmaceuticals to create a toxin that invokes fear in those exposed to it.

In one episode, our hero is exposed to the poison just like in Batman Begins, and his helpful sidekick must come up with an antidote before the effects become permanent.

Later on, the recreational drug is weaponized, and part of a plot to terrorize the city.

Oh, and in the end, each villain gets a ‘taste of their own medicine’ and become completely incapacitated as a result.

Superman has Lex Luthor. Captain America has Red Skull. Every hero has their arch nemesis. The Arrow writers have ransacked the Batman archives and used a lot of his common villains. Okay – I’ll concede I’m exaggerating – they haven’t used any household Batman villains like The Joker, Penguin, Riddler, Two Face, or Bane, but they have used plenty others, such as Ra’s al Ghul, Slade Wilson/Deathstroke, Dollmaker, Lester Buchinsky/The Electrocutioner, The Royal Flush Gang, and Deadshot. These characters might be the second-stringers of Batman’s villainous lineup, but they are Bat’s nonetheless.

The Head of the Demon

And finally, as of season 3, the single biggest Batman rip off has been the usage of Ra’s al Ghul. Most people will remember Ra’s al Ghul from the Christopher Nolan trilogy, played by Liam Neeson.

What you might not know is that this character is very entangled in the Batman mythos. Ra’s has a love-hate relationship with Batman. On one hand, Ra’s is a villain and kills people, yada yada. But on the other hand Ra’s is also the grandfather of Bruce Wayne’s son, Damian. Say whhaaaatttt? Yeah, Ra’s’ daughter Talia knocked boots with Batman and had a little bat baby. 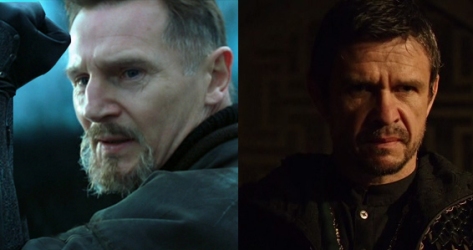 Where it becomes interesting is that in spite of the fact that Batman always thwarts Ras al Ghul’s efforts to destroy Gotham or the world, Ra’s al Ghul greatly admires Batman, and insists – er, demands – that Batman marry his daughter and succeed him as the next leader of the League of Assassins.

This story was almost copied pound for pound in Arrow, Season 3, Episode 19 The Offer, in which Ra’s al Ghul spares Queen’s life, and asks him to take over the throne.

My biggest quarrel with this is that it pretty much seals the deal in terms of CW ever mixing the Arrow-Flash-Universe with Batman. With the last episode, the CW writers stopped beating around the bush, and pretty much shown down there ever being a chance of Batman being introduced to the show – which is a damn shame.

That being said, Arrow is still an incredibly fun show to watch, and I am super excited for next week’s episode where Suicide Squad and The Atom are officially revealed. If you like what Marvel is doing with their shared universe (the MCU), then you’ll get a kick out of watching Arrow and Flash on CW.