I had been waiting for Deadpool since Fox officially announced they would make it back in 2014. I was waiting before then, since the idea of a Deadpool movie first came about in 2009 when a horrible rendition of the character appeared in Fox’s X-Men Origins: Wolverine, the shittiest X-Men movie in the franchise to date. In fact, XMOW was so shitty Fox literally made a sequel where they go back in time to undo the events of the movie, effectively making it non-canon.

As tangential as that may have sounded, it wasn’t. It’s the shittiness of Fox’s earlier comic book movie endeavors that produced the colossus (ha, get it?) of a movie that is Deadpool.

Deadpool is a wisecracking mercenary who has healing powers similar to Wolverine, and who uses swords, knives, guns, and chimichangas to hilariously kill his way through life. He’s also cognitive of the fact that he’s a comic book character and often “breaks the fourth wall” meaning he addresses the audience directly.

Fox’s 2016 Deadpool stars Ryan Reynolds as the titular character Deadpool / Wade Wilson. What you may not know is that is technically the second time Reynolds portrayed the character. As previously mentioned, Reynolds played a version of the character, albeit a very much under done and poorly written version, in X-Men Origins: Wolverine. So that fact that Fox doubled down and went balls out to make a solo, R-Rated comic book flick about a character known for cussing up a storm and killing people actually got me a little hard.

If you haven’t seen Deadpool, SEE IT. Based on how many records it’s broken it’s hard to imagine there’s a soul left on this earth who hasn’t seen it. Ya know what, if you’ve seen it already, go see it again, smart ass.

Lets be honest, Fox took a bigger gamble with Deadpool than Marvel/Disney did with Guardians of the Galaxy. Which do you think is easier to market to children, talking raccoons in talking trees, or burn victim, foul mouthed, sex addicted mercenaries?

The movie was everything I expected and much more. It wasn’t just the above. Despite cramming in the character’s core persona and mythos, they managed to make the character relatable in and out of the spandex. Wilson talks like us. He walks like us. He drinks like us. He loves like us. He jokes like us. He’s not a choir boy, and he does fuck up every once in a while, but despite the fuckups he’s still a good guy, not a villain. And just like all of us, sometimes bad things befall him, for no wrongdoing of his own. And this movie did a fantastic job of showing what extremes a good people will go to in order to save themselves, and more importantly to better the lives of those we love.

Despite how much I love Marvel and their titles like Iron Man and Captain America, Wade Wilson is 10x more relatable to the audience than Tony Stark or Steve Rogers.

I don’t need to review this movie. The movie was great, and honestly you should see it. The only, and I mean only bad thing about the movie that I say actually has nothing to do with the movie itself. It has to do with the marketing. Fox was so worried about filling seats that they over marketed it. Leading up to the movie there were so many different teasers, trailers, clips, commercials starring Deadpool and viral marketing that by the time I first plopped my ass in the theater seat, I felt as if I had already seen the movie. And to be honest, I kinda did. Spend 20 minutes on YouTube and watch all the aforementioned and you’ve basically seen the movie. But just because I got filled up on Costco free samples doesn’t make the movie any less enjoyable.

Despite having blown most of its load in it’s advertising campaign, I still thought Deadpool was an amazing movie, and it definitely did not disappoint. It was funny, no, it was gut wrenching hilarious. On several occasions I thought I needed a respirator because I was laughing so hard I couldn’t breathe, which is sort of ironic once you’ve seen the movie. I particularly loved the jab about KFC sporks, especially since I thought I was the last person on earth to remember the fabled tool of the ancients. Just as Deadpool riddles his enemies with bullets, the entire movie is riddled with dick and fart and sex jokes and Mexican food. Comical jabs abound. The film has plenty of in your face comedy, but it also has tons of more subtle comedic moments that you have to pay attention to in order to appreciate. Tonally, the movie felt a lot like Archer.

The movie played very fast and loose with the whole breaking the fourth wall bit. Reynold’s Deadpool not only did so, but the movie also was self-aware and made plenty of references to out of movie productions that Reynolds and his former co-stars had participated in, such as Green Lantern, the Blade series, and the overall X-Men­ franchise even going so far as to name particular actors like Patrick Stewart, James McAvoy, and Hugh Jackman. 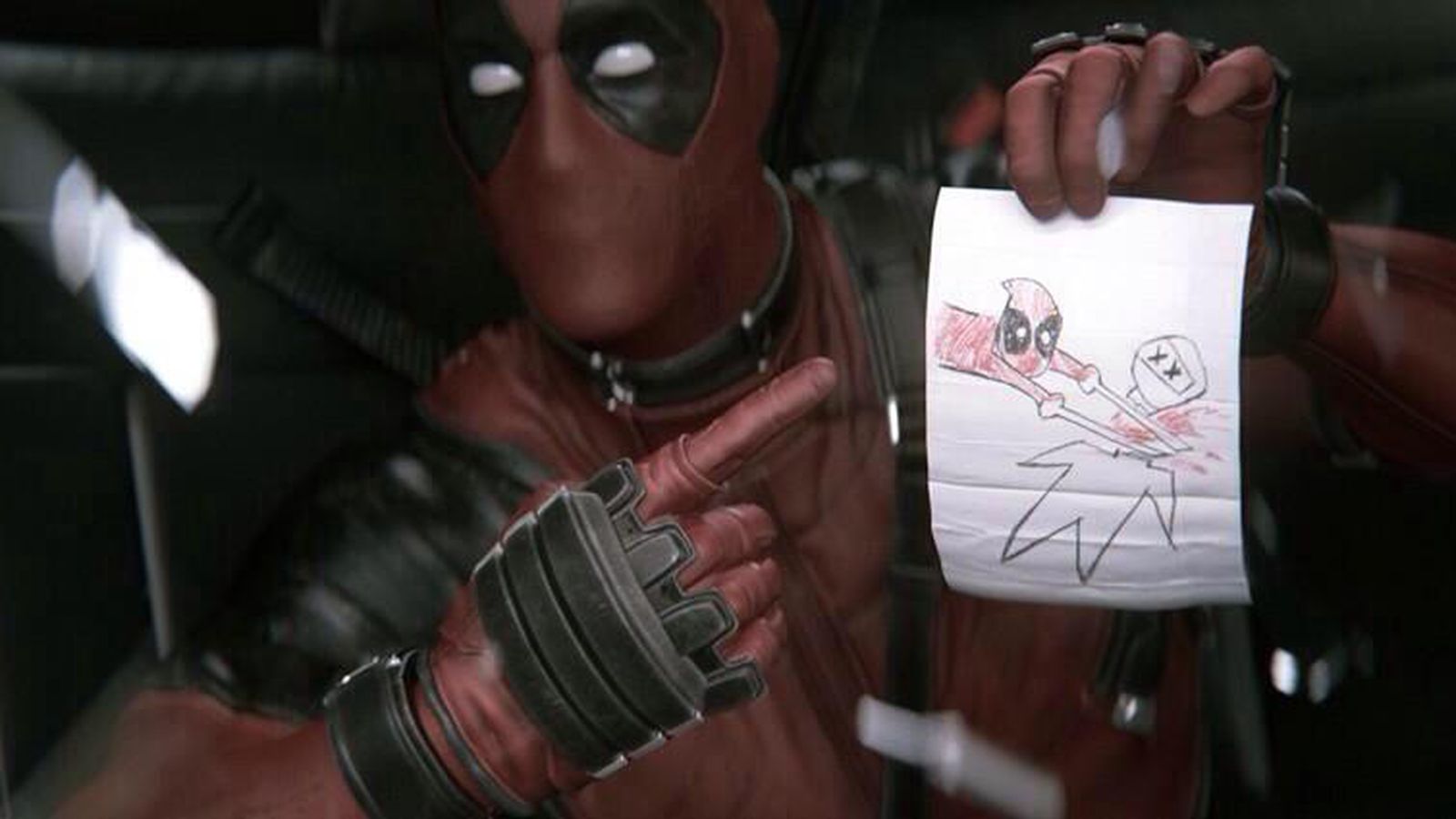 It also goes without saying that the movie had plenty of action. Which is interesting now that I think about it because despite centering around a guy with swords and knives and things that go boom, the movie put comedy in the drivers seat, drama in shotgun, and action in the backseat. The X franchise was so dry and dull and comedy-less with over the top action that it was refreshing to see a change of formula. Deadpool, besides his healing, really doesn’t have “super powers”. He can’t fly or control the weather or shoot red crap out of his eyes or lift the entire Golden Gate Bridge. He can run, jump, and shoot, and he does ‘em all with style. This is definitely not an action movie the likes of Michael Bay.

Most of all, I am happy for Ryan Reynolds. He seems like a nice guy who just kept getting shafted career wise. Everyone loved him in Waiting and Van Wilder, but as iconic and memorable as those roles were they probably didn’t pay too well. Blade 3 was okay, but nothing compared to Blade 2. Then he had a series of mega flops like Green Lantern and R.I.P.D. So it’s great to see him getting a stab at a role that’s finally on par with the weight his name brings to a movie.

If you want a hilarious movie, with relatable characters, excellent dialogue, a healthy dose of action, the occasional insensitive remark, and a possibly CGI’ed super suit, then this is the movie for you. Or if you’re just tired of apocalyptic (irony again!) superhero movies.

If you’re like me, you saw the commercials for 2014’s John Wick and thought “dang that looks kind of cool” and naturally never got around to seeing it. Maybe it’s because I don’t have TV service and therefore live under a rock, but I don’t recall much advertising. It got added to my mental “to watch list” and I forgot about it until I saw it at the local Red Box the other day when I ended up renting No Good Deed.

Well the very next day Good Deed was back in the box and $1.50 later I was on my way home with John Wick in my left hand, Major’s leash in the right hand.

In the Bourne series, Matt Damon introduced the world to hurting people with seemingly harmless objects, like ballpoint pens, books, and towels, as seen here.

In the Taken series, Liam Neeson introduced us to the art of finding people, punching them in the throat 18 times, and then killing them.

Well get ready for a movie that will show you a whole new, awesome way of kicking ass as Keanu Reeves tears through New York City’s underbelly with new and innovative ways to use a pistol! I figured Shoot ‘Em Up had covered every conceivable way to use a pistol but that movie was straight up cheesy.

Keanu Reeves as John Wick is a legitimately awesome and intimidating character. Reeves is dry as ever, what else would you expect. But he’s dusted off the Matrix and was able to also portray a man who is funny, caring, angry, and grieving. Rounding out the cast are Alfie Allen, Willem Dafoe, Dean Winters (the Allstate mayhem guy), Adrianne Palicki, and for just a brief moment Ian McShane and John Leguizamo.

The movie itself had the tone of Constantine, with elements of Taken and Boondock Saints all sort of hodgepodged together, with a dash of Sin City. When it comes to my personal taste in movies, the darker and grittier, the better. If it’s not rated R, it’s not worth watching.

In a nutshell Reeves plays a retired assassin who traded in his career for a white picket fence. Shortly after his wife dies (of natural causes) he crosses paths with the guy who got his dick cut off from Game of Thrones, and he descends back into his former life of violence and confronts the local Russian mafia head on in a fight to the death. Russians make such good villains, don’t they?

The movie had a ton of violence but it was tastefully done, and wasn’t just thrown in there to fill time. The movie also had a sense of humor. It wasn’t the laugh out loud type of comedy, but there are plenty of instances that have you chuckling to yourself muttering “that’s classic!”

There isn’t much to say of the movie in terms of story. I wouldn’t give it an A for originality, but despite the over done former-badass-becomes-badass-again storyline, they managed to squeeze water out of rocks and make a genuinely entertaining movie that doesn’t feel like all the others.

To be honest, at first I thought it was going to be one of those flicks that looked cool in the trailers but where the movie itself would utterly disappoint. Sort of like the entire X Men series.

Truth is I was utterly mistaken. If you like action movies or crime dramas, then you have got to see John Wick! And if you’re done thawing out from the winter you can waddle your way over to the local Red Box and get a copy. You won’t be disappointed!

I would absolutely see this movie again. I give John Wick an 8/10.

San Diego shooters may know that DGM is a chain. From what I gather from other shooters and friends, the location in Mission Bay/Bay Ho is notorious for horrible customer service. In the dozen times I’ve been there, I never once found a polite employee.

BUT, the Santee location is excellent. I have been to this location about 5-6 times now, including a recent firearms purchase, and every time the staff was spot on.

Here are some highlights:

Nothing bad to say about this location at all. Heck, it’s even directly off the freeway exit, making it easy to get to.

Their range prices are great. Much better than P2K.
Their ammo and firearm prices are market competitive. YES, you can purchase a super expensive $2,200 Sig .308, or a $1,200 Leopold scope, but these are the prices you would pay anywhere, so that does NOT earn it a $$$$ establishment, in my opinion.