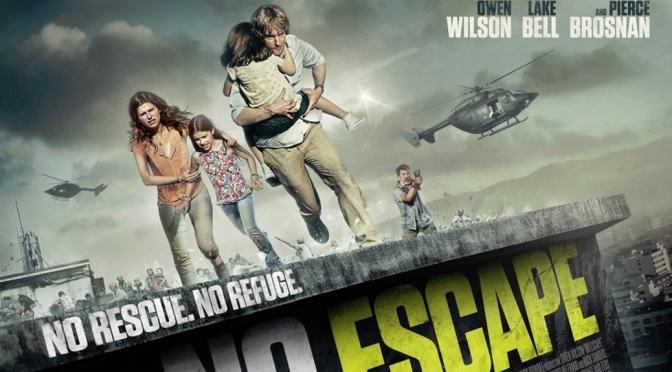 So I’m a little rusty on my movie reviewing, so bear with me. I think I saw a trailer for this movie a couple months ago, not really sure. Anywho I went and saw an early showing of No Escape last night up in Mira Mesa, and had no idea what to expect, which is a good thing.

Here’s the spoiler-free run down of the movie: Owen Wilson is an American family man who relocates his wife and two daughters to an unnamed Southeast Asian country (we know because it borders Vietnam) for a new job after his previous employer went belly up. Times are tough, tough enough to move to a third world nation in pursuit of a job.

Their flight lands, and we enter the culture shock sequence for the family as they don’t speak the language, and the nicest hotel in town doesn’t have working television, internet, or phones, and all the other first world luxuries we take for granted. But, the family meets a boisterous, western expat, Pierce Brosnan, who helps point them in the right direction. Yay, a fellow white person! This place isn’t too scary anymore. No, but seriously, right?

The foreplay is short. Maybe 12 minutes into the movie shit hits the fan. As Owen Wilson is roaming the area trying to find a newspaper, he inadvertently ends up in the middle of a violent confrontation between riot police and an angry mob armed with machetes, bats, and AKs. Think Hotel Rwanda, but in Asia, and way fucking scarier.

Wilson darts and dashes his way through the city trying to find his way back to his hotel and family, while also avoiding the mobs. He reunites with his family, and parental instincts kick in as mom and dad struggle to safely navigate their way through the perilous city, with kids in tow.

What to know what happens next? Go see for yourself.

No Escape will have you on the edge of your seat and cringing from start to finish. The movie was definitely action packed but not in the typical Liam-Neeson-throat-smashing way we’ve grown used to in the past couple years. Remember, our protagonist isn’t Jason Bourne, he’s a family man, and on top of that he’s got his wife and two little girls with him, and they have no idea where the hell they are. So there is no bare chested ammo bandolier action hero. Just a dude doing the best he can to keep his family alive when all hell breaks loose in a foreign land.

The closest movie I can think of in terms of setting and that feeling of anxiety this movie brings, is The Purge: Anarchy, which came out almost a year ago, except No Escape has a much more realistic plot. Everyone in the Purge had 364 days to batten down the hatches and arm themselves to the teeth in preparation. This family isn’t even sure where to get their free continental breakfast and then bam, political uprising.

I don’t want to give away too much as far as the story goes, so I’ll leave it at that. The movie is very good. I was very surprised.

When watching movies like this, I always find myself thinking “I would do this, I would do that!” But then again I also watch a ton of zombie movies and like a weirdo I have actually invested a fair amount of thought into how I would survive an oh-shit situation. Most people don’t, including our main characters, which made this movie, and everyone’s acting very believable.

We haven’t seen Owen Wilson in too many movies lately so who knew what to expect here. We do know that we loved him in Wedding Crashers and a bunch of other comedies so this was a little off course for him, but let’s not forget he also knocked Behind Enemy Lines out of the park way back in 2001, which was also about an American dude running for his life from foreigners who want to kill him. Wilson did an amazing job wearing a lot of hats; husband, father, survivor, and if need be, killer.

Lake Bell, who plays the wife/mom, also does an amazing job in her role. She was reluctant to move overseas in the first place, and you can feel a little bit of that tension between mommy and daddy from the onset of the movie without rubbing your nose in it. Even in the midst of chaos the parents can still have tiffs, for better or worse.

Even the little girls did an amazing job, portraying believable pains in the ass. You just wanted to yell “I’m trying to save your life now for the love of Christ shut up and don’t make any noise or they’ll find us and kill us!”

Oh, and Pierce Brosnan was there too. He really didn’t have a huge role, but I enjoyed his 10 minutes of screen time and social commentary.

It’s difficult to summarize this movie because it’s not that kind of a movie, where it’s told like an epic story, with compartmentalized events. So here’s my conclusive list of bullet points on the film:

All said and done, No Escape was a very good movie, and I highly recommend you go out and see it. I give it an A-, and that’s only because I thought the movie was too short, and I could have gone for a few more rounds, maybe 20-30 minutes more longer would have been nice.