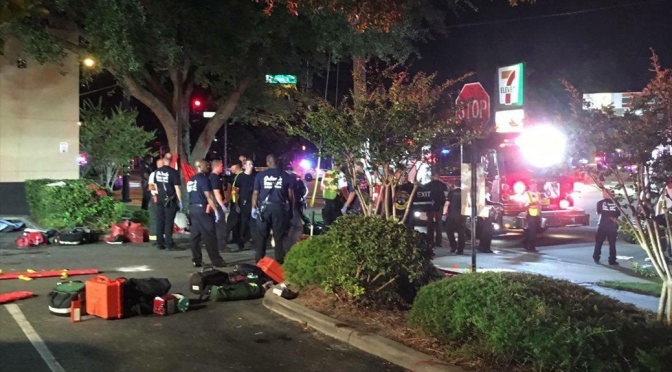 It goes without saying that the recent shooting terrorist attack in Orlando was a horrible event to be condemned, and that everyone prays for the victims and their families. This unfortunately has been said many times following such events. My goal here is not to offer my heart on my sleeve. It happened, it was horrible, I cried, I prayed… and now what? Where do we as Americans go from here? What can we learn from this event and others like it before?

While the attack took place at an LGBT nightclub, it is my opinion that we all remember this was not simply an attack on homosexuals or transgendered people. It would be insulting to pigeon hole the victims into such narrow definitions. The victims may have very well been targeted because of their sexual orientation or lifestyle, but it is important to remember that above all else, they were people. Gay, straight, blue, purple, American or foreign, dozens of people were slaughtered, and everyone should feel that pain in their hearts.

I think this is one of the areas where Americans of any political leaning can find some common ground, and yet this has become a politicized issue. You’ll be hard pressed to find any pro-2nd amendment American who isn’t thoroughly frustrated that this man was able to legally purchase firearms. Who wouldn’t be? Here’s a man that was investigated by the FBI not just once, but twice, and as far back as 2013; three years before the shooting, and yet was somehow able to obtain firearms. I’m pro-gun and that pisses me off! This wasn’t a failure of laws. This was a failure of law enforcement. Myriad laws are already on the books that should have kept this man from getting his hands on firearms. How he was able to pass a background check to get a firearm, much less a job as a security guard for federal buildings should leave every American angered.

As is the case with any horrible events, people are desperate for answers, and we’re equally anxious to cast blame on someone, something, anything. I’m conservative but I certainly don’t blame liberals or democrats for this. I don’t blame guns for this. I don’t blame the gun store who sold the firearms for this. Despite a lot of anger directed towards the FBI, I actually do not blame them for this either. Individually, it seems as though every cog in the machine did what it was supposed to do. The problem isn’t that we don’t have systems in place to identify red flags, but that the various systems we entrust with our safety are not properly integrated well enough to allow us to act on those red flags.

Take for example a fax machine. One fax machine may indeed work very well; scan, print, and fax like it ought to. Another fax machine may be equally up to task. However, without a phone cord between them – a medium of communication – each fax machine is an island and functionally useless. What we have observed the hard way, through trial and error, and with blood, is that despite admittedly competent law enforcement agencies and well-intentioned laws, the integration of our various systems, architectures, and law enforcement agencies is sorely insufficient.

The war on terror is different than any war before it. Our military with all its might is all but useless in our fight against domestic terrorism. Stealth bombers, drones, sonar, radar, satellites, tanks, submarines cannot help us detect or stop homegrown or domestic terrorism. Stopping these attacks is not a matter of weeks, months, and years. It is now a matter of days, hours, and minutes. We have precious little time to prevent these attacks between the moment a flag is raised and the moment of an attack. As such, the need for agile and robust communication between law enforcement agencies and other interested parties should be priority number one. The emphasis is not so much on building up our law enforcement, as much as it is integrating it.

This is also not a time for political posturing. In fact, this is a politically humbling experience for both camps and that is because this attack crushed a lot of the narratives both sides habitually espouse and cling to. Omar Mateen was U.S. born, and seemingly self-radicalized, unraveling the narrative of terrorism being the byproduct solely of U.S. intervention in foreign, predominantly Muslim nations. Omar Mateen never having been exposed to the crisis of the middle east was purely motivated by religion, not personal experiences or losses. Given the discovery that he attended a mosque that was also frequented by another known Islamic terrorist, the threat of Islamizing mosques here in the states can no longer be ignored. It is entirely possible, and even plausible, that mosques in the United States are promoting hatred and propagating anti-US sentiment to the point of violent extremism. Omar Mateen was also able to purchase guns through all but legal channels, albeit illicitly and under the nose of law enforcement, lending credence to the argument that although the gun laws might be sufficiently strict, enforcement of said laws is clearly lacking.

After the Boston Marathon bombing, and the San Bernardino shooting, I thought to myself there was just no way that none of the attackers’ close friends or family members had any idea that they were up to no good. In light of the Orlando terrorist attack, we learned that someone did in fact know Omar Mateen was planning an attack – his wife. And despite the fact that she knew and supposedly tried to talk him out of it, she wasn’t so inclined as to notify law enforcement about it. This is a chilling, and telling fact about certain communities. People close to homegrown terrorists probably are aware, but reluctant to share. It’s too early to make any generalizing statements, but the U.S. might not have as staunch an ally in the broader U.S. Muslim community as we would hope.

For those on the political left, it is now time to acknowledge that surveillance and tighter scrutiny of Muslim communities in the U.S. might be our safest bet, even if it seems discriminatory. Political correctness may need to take a back seat to pragmatism.

For those on the political right, we need to apply our efforts to promoting law enforcement practices that crack down on illicit gun use and trafficking. The NRA through its active membership carries a lot of political weight. Gun owners need to use that influence to affect the changes in our government that is needed to prevent blatant mistakes like this from happening. Yes, that means pro-gun people need to push for law enforcement to crack down on ill-advised gun sales.

This is where waiting periods for firearms can actually be a blessing. A waiting period could allow the FBI ample time to cross check would-be gun purchasers with various criminal databases, suspected terrorists, and people on various watch lists.  If a flag is raised, the FBI can then alert and coordinate with other agencies and the gun store to monitor or even apprehend the buyer at the time of purchase/pick-up. Doing so may not have any measurable impact on preventing crime or terrorism, and extending this olive branch may not dissuade the anti-gun crusade of the left, but it might, and it would not place any noticeable inconvenience on lawful gun owners.

While gun ownership is getting some heat at the moment, the truth is that an armed and vigilante populace is still one of the safest hedges against domestic terrorism and violent crime. Gun owners in free states who choose to carry in public have the burden and responsibility of staying vigilant to resist attacks that may spring up. I applaud you, and wish that I too was able to legally join you here in California. May you never have to use your firearm to defend yourself, but God speed if you are forced to. We’ve witness how devastating a simple attack can be, and the sad fact is that we will likely see more of these attacks spring up in the near future, with shorter hiatuses between each subsequent attack as would-be attackers are made more brazen by the tragedy they see unfold on the news.

Let us all remember that we will find strength in unity. Generosity to a stranger can create a friend. The good deeds we plant today, will bear fruit tomorrow. We are fortunate to have thousands of men and women working diligently across the country as law enforcement, military, paramedics, firefighters and other first responders. Let us not make their jobs any more difficult for them, so please practice civility, responsibility, and caution in your everyday lives. Be courteous, be peaceful, be safe, and be smart. Firefighters have better things to do that pull you out of a car that you wrapped around a tree because you were driving recklessly. Police have better things to do than respond to a noise complaint. We must all do our part, however small, however tedious, however seemingly trivial, if we are to pull through these trying times as a nation united. It’s a bumpy road ahead, and we won’t make it on three tires.