It’s about fucking time! Trainwreck is the raunchy, inappropriate, horrible, tasteless, repulsive, guilty-pleasure, gut-busting comedy I have been waiting all my life for.

I’ve written quite a few movie reviews recently about all types of movies; action, horror, comedy, drama, satire, crime thriller, sci-fi, and cult classic. Sometimes you get movies you thought would be great, but greatly disappointed *cough* Ultron *cough*. But other times you get movies you thought would be a train wreck, and instead you get Trainwreck. Despite the title, this movie is anything but. 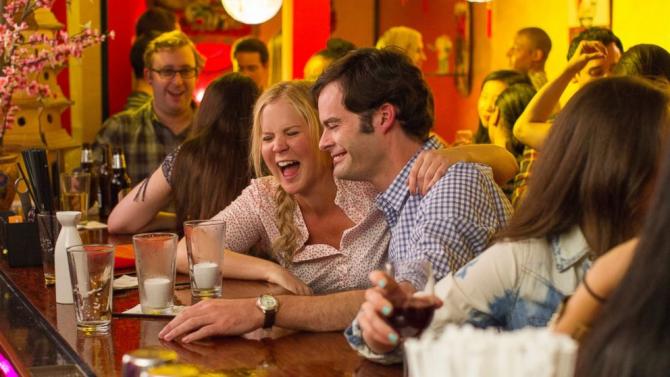 No duh, I thought the movie would be funny. A comedy movie starring Amy Schumer and Bill Hader, how could it not be funny? But I didn’t expect it to be the funniest movie I have seen in years. I dare to say it’s the funniest movie of the decade, maybe this century.

The combination of Judd Apatow directing and Amy Schumer writing as well as starring in the movie is amazing. I haven’t laughed this hard in a long time! The entire movie is over the top funny from the get-go, but somehow never crosses that line into campy territory. Trainwreck walks that fine line of as funny as you can possibly get without being stupid.

The entire cast pulls their weight in this movie and I was blown away by the sheer number of cameos and guest appearances.

It goes without saying that Amy Schumer was amazing. If you like her comedy skits and her television show then you’ll go crazy over Trainwreck, which is Amy Schumer x 10, her magnum opus. Amy Schumer essentially plays a parody of her cinematic self, named Amy, naturally. As a young kid her father (perfectly played by Colin Quinn) warned her and her sister about the dangers of monogamy after a failed marriage with his wife/Amy’s mother. The young Amy took her father’s advice to heart and heeded his warnings well into adulthood, purposefully avoiding lasting relationships. Her shameless romp through New York comes to a screeching halt when she falls in love with Aaron (Bill Hader), a nice guy doctor who is the centerpiece for her latest work assignment at a sleazy tabloid company. The story follows Amy as she struggles to find a meaningful relationship while still heeding her father’s warning.

Most movies feel like the Breakfast Club, where you have the jock, the princess, the nerd, the bad boy, the outcast, etc. What I appreciate about Judd Apatow is his ability to craft a well-rounded ensemble of characters without resorting to caricature archetypes.

Bill Hader brings a solid performance. Hader looks like a normal guy and maybe he is, but that doesn’t mean he can’t still be funny, charming, smart, sincere, emotionally intelligent, and occasionally score a shot on LeBron James. The onscreen chemistry between Hader and Shumer is awesome, and it feels fun and natural to see them spar and dance on screen.

When I said there were a lot of cameos, I meant it. The movie features Colin Quinn, LeBron James, John Cena, Dave Attell, Tilda Swinton (who looks nothing like Tilda Swinton), Randall Park, Daniel Radcliffe, Marisa Tomei, Method Man, Tim Meadows, Matthew Broderick, Marv Albert, and Chris Evert. And every single of one of them killed it!

LeBron James might not be Oscar material but despite playing himself he’s still 10x the actor Kristin Stewart will ever be, and had some of the funniest lines in the entire movie and somehow managed them without so much as a smirk.

(Call me an asshole but) This is the first time I’ve seen a movie where I would say Tilda Swinton looked bangin’ hot. She too fabulously plays her role as a bitchy New York columnist.

John Cena, John Cena. Where do I even begin with John Cena… Mad props to Cena for taking on this role as he’ll be the butt of his friend’s jokes for years to come. If you’ve ever seen the movie, think Eminem in the opening scene of The Interview.

They couldn’t have picked a better title for the movie. Trainwreck describes the movie and Amy perfectly, as her life careens out of control from one disaster of a relationship to the next. And just like a train wreck, the movie is horrible but you just can’t help but look on. The movie really is horrible. By that I mean that the acting is great, the directing is great, the story is great, but the humor is devious and I’m probably going to hell for enjoying it.

The movie is so hilariously offensive to everyone, but so innocently portrayed that you can’t help but love it, like Cartman. Men, women, straights and gays, kids and the elderly, blacks, whites, Puerto Ricans, Asians, effeminate men, millionaires and street beggars, no one was spared and no mercy was given. The movie was a parade of profanity, stereotypes, and other things mere mortals dare not whisper in public, like Voldemort. Trainwreck is everything that’s wrong in the world but throughout the entire movie I was busting up laughing begging for more, MORE!!!! You do get more, plenty of it. In fact it’s also super long for a comedy, stretching just over two hours. I usually relegate comedies to movies I only watch when they are at Redbox or rerunning on TV, but this movie is the exception. This movie is officially on my list of guilty pleasures, but as Billy Joel once said, “I’d rather laugh with the sinners than cry with the saints.”

Despite the outlandishness of it all, the movie comes together amazingly well. The weight of real life doesn’t get lost in the story, and the characters all deal with very real problems that the audience can relate to. In true Apatow fashion the movie delves into the inner sanctum of modern life such as arguments with your loved one over trivial things that won’t matter in a couple hours, kids, step kids, marriage, death, pregnancy, family, parenting, careers, friendship, and occasionally snorting lines of adderall off peoples foreheads.

I want – nay – I must see Trainwreck again. It was just that good! In fact, I might even buy it when it comes out on DVD. Mom and dad if you’re reading this, Christmas is just around the corner. Can you say stocking stuffer?