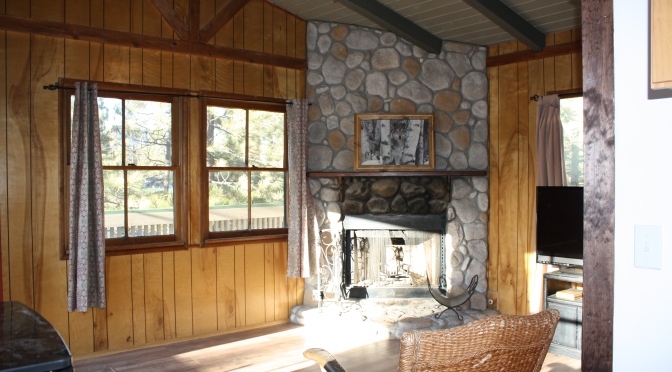 I am incredibly excited about the the recent renovations to one of my cabins up in Big Bear, and very pleased with how everything turned out. In late 2015 I bought several cozy cabins in Big Bear Lake, CA and while all they are all awesome in their own way, some needed a little bit of tender loving care to bring them into the 21st century.

After a couple weeks of renovations, many one day trips up to Bear and back, and several dozen trips to hardware store, the immediate work is done. And while there is always something more to do, I am proud to show off “Baby Bear 2017”.

It was a journey. When I bought the home, this unit was tenant occupied and she owned a cat. The place was a wreck. There was cat fur everywhere and traces of kitty litter all over the bedroom and bathroom. The lighting was outdated and the room was very dark. Several floor lamps were required to illuminate the living area and even then it was reminiscent of a mausoleum. The kitchen had a 7 foot ceiling so head space was at a minimum. A drop down room divider prevented light from the living room from breaking into the kitchen, which made the cooking area incredibly dark as well. The kitchen had an all-in-one sink/oven/stove/refrigerator/freeze that I think had been there since the 1960’s if not earlier. Amazingly, this antique still worked, but it was not efficient, and was more suitable for elves than humans. Cabinetry and storage was sparse, and counter top space was non-existent.

We gutted the kitchen entirely. We took it down to the studs and put up new dry wall with a fresh coat of paint. I hauled lightly used cabinets from a kitchen demo a homeowner in La Mesa was doing. For $200 I got an entire kitchen worth of cabinets, almost sink, faucet and garbage disposal, and brand new cabinet stainless steel hardware. Left over tiles from my bathroom remodel in San Diego that had been taking up space in my garage for a decade became the new counter top and back splash, and left over grout from our winter 2016 kitchen remodel helped as well.

The all-in-one appliance was replaced with the new sink, open box but new studio sized gas stove/oven combo, and a studio sized fridge/freezer combo. It still needs a microwave but for the time being, the appliances are almost good to go.

The drop down room divider was removed. It’s amazing the difference that extra 12 inches of unencumbered space has on the brightness of the kitchen. The kitchen is now replete with pots, pans, utensils, glasses and dining ware as well as miscellaneous kitchen nick-knacks like pizza cutters and ice cream scoopers.

The old, cat tainted green carpet was ripped out and replaced with new wood laminate flooring which extends from the living room into the kitchen. This one feature made the whole home brighter even before tinkering with the actual light fixtures. Carpet absorbed light, while the floor reflects it. It makes the room feel more spacious as well.

A new ceiling light/fan combo was mounted high on the ceiling to help illuminate the entire room, which it does nicely. The fan will help circulate the heat in the winter, and the cool air in the stuff.

Jenny replaced some of the older curtains with newer, lighter ones which again brightened up the room. If you haven’t picked up on it yet, this cabin was dark before the renovations. It would have felt like medieval living.

The old linens, pillows, blankets, towels and throws, were replaced with new, lively ones, complete with new mattress and pillow protectors. And we stocked the restroom with nice, thick Charmin toilet paper, none of that cheap single ply for our vacationers!

Several drafts around windows and doors were sealed, and sealed well. Remember, Big Bear days can get down to 30, and Big Bear nights can get down to single digits, so retaining heat is just as important as producing it. A little bit of caulk, foam sealer, and rubber tube gaskets goes a long way. This home is now air tight.

Last but most importantly is the home got a great scrub down. New stuff and niceties won’t last long if things are maintained and even a home complete with top of the line everything can be an utter dump if not clean. Cobwebs be damned! This place is spic and span now.

Am I happy? Absolutely?

Is there more to be done? Always. I do have a laundry list of things I would like to eventually do like insulate the floor and crawlspace, and re-floor the deck. But the immediate future holds a futon sleeper and double pane windows. But for now, I am very pleased with how it all turned out and am looking forward to putting this bad boy to work in 2017.