The Game of Thrones season six finale raised just as many questions as it answered. Where one door closed, another was opened. While audiences everywhere breathe a collective sigh of relief over long overdue grievances finally being settled, we reel in anticipation of what is to come next season.

The annihilation of House Tyrell, the unification of the North, the destruction of the Great Sept, Bran Stark finally assuming the role of the three-eyed raven, the slaughter of the faith militant, and Daenerys finally setting sail for Westeros, army, dragons n’ all. And we finally got confirmation of what we all already suspected was the case – that Jon Snow is the son of Lyanna Stark and Rhaegar Targaryen. Many a reign have ended. Many a feuds have been settled. But bad blood has been created that may shift the tides of power.

The Age of Women

In previous seasons of GOT there was a strong theme of the young replacing the old. We’ve seen Rob Stark assume the head of House Stark and ultimately be declared the King of the North. We’ve seen Jon Snow become the leader of the Night’s Watch. We’ve seen Geoffrey claim the throne previously held by his father Robert. The ancient Greek story of Cronus devouring his father Uranus has been a recurring theme as well, with Ramsey Bolton killing his father Roose Bolton, Tyrion killing Tywin, and Euron Greyjoy killing Balon Greyjoy.

Now, we enter The Age of Women. Cersei Lannister is now the Queen of Westeros, and arguably the head of House Lannister. Olenna Tyrell is the head of House Tyrell. Ellaria Sand rules Dorne. And of course let’s not forget Daenerys Targaryen commands an army of unsullied, Dothraki, the Second Sons, a massive fleet of ships, and drumroll… three dragons. Sansa Stark has done quite well for herself, outliving her enemies and managing to take back Winterfell. Arya Stark is making a name- er… lack thereof? for herself and has crossed quite a few names off her list. Brienne of Tarth is the most trusted confident of several high ranking persons. But perhaps my favorite character of Womandom and certainly the most worthy of admiration is the young, thunderous Lyanna Mormont. This girl is going places. Her stature inversely corresponds to the respect she commands. Her age inversely corresponds to her wisdom. And let’s just be real: Lyanna Mormont is a badass.

My better half noticed that Cersei is also not adorned with the usual Lannister gold. Neither does she appear ravishing, per her norm. Instead her attire strikes a more stern, and militaristic look. Besides her cheekbones (did you catch that reference?), Cersei only had one redeeming trait and that was the love she had for her children. The only thing that kept Cersei in check in the earlier seasons was her concern for her children. Acting too hastily could jeopardize the wellbeing of her children. Now husbandless, fatherless, and childless, Cersei no longer has any moral restraints towards violence and doing anything to acquire and keep power. I am interested, and worried to see what Cersei unchained is capable of.

This was the biggest highlight of the episode to me. It was a long time coming when Jon Snow and Sansa Stark finally met each other once again. Then came the battle for Winterfell, after an unsuccessful wooing of other houses. But now the day has finally come when a wolf flag flutters over the turrets of Winterfell, and one by one the Northern houses are falling into line, pledging their loyalty. And we know that Bran is but a stone’s throw away, and even Arya is now back in Westeros and ready for action. We’ve never had so many Starks in such close proximity and in such good standing since the first season. This to me is so great because Game of Thrones rarely rewards Team Stark with good news. 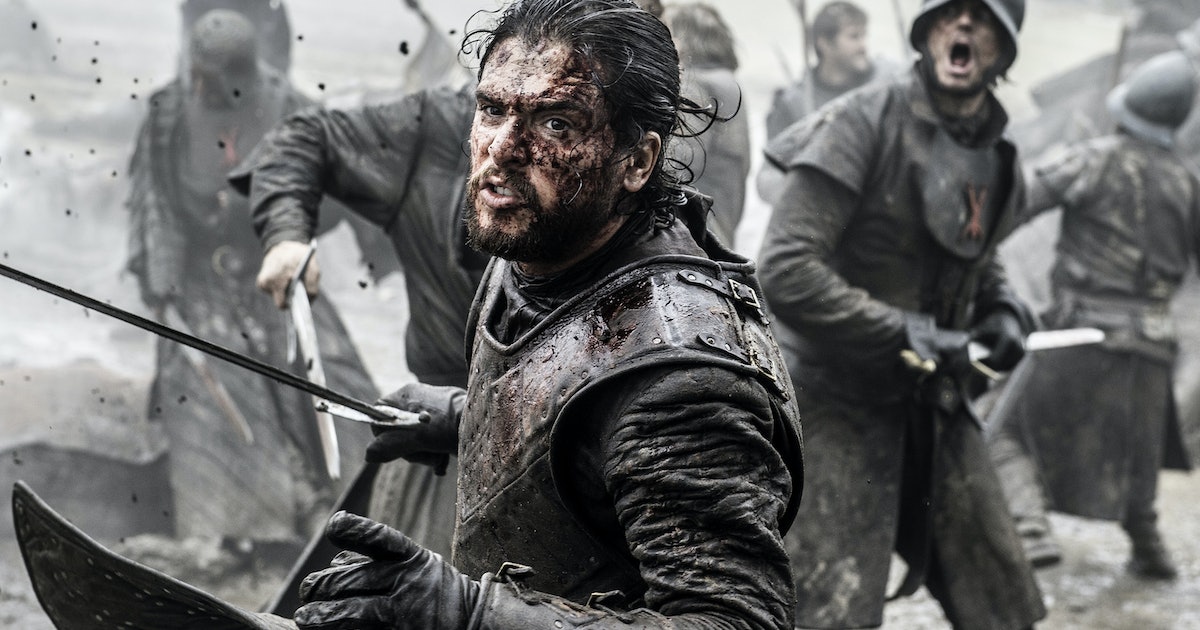 From the crippling of Bran Stark, the beheading of Ned Stark, to the Red Wedding, to the rape of Sansa Stark, the blinding of Arya Stark, to the betrayal and murder of Jon Snow, the Stark family has had a very hard run. Nothing has come easy for them. But the one thing we can take from this is that the Starks are hard sons of bitches. They don’t go down easy. Despite their humble demeanors, the Starks are to be reckoned with and it is very nice to finally get a taste of justice.

Starks United Against No Enemy

I’ll always be Team Stark and though they aren’t jousting for the Iron throne I do hope they deliver one hell of an ass kicking. Except that there isn’t really any living ass to kick. Ned Stark was killed by Geoffrey who is dead. Rickon Stark was killed by Ramsey Bolton, who is dead. Anyone who was once captured and worth saving is now dead. The Starks are united now, but against who? I suppose against the white walkers but I feel like delivering an ass whooping to a bunch of snow zombies just doesn’t have the same appeal as say, killing a bunch of Lannisters would. When God gives you lemons, I guess…

Perhaps the Starks could rally and retake Riverrun, the ancestral home of their mother.

Whichever direction the wolves point their fangs, I hope to see Bran and Arya get back into the fold. Imagine the powerhouse of having John Snow, King of the North, leader of the Freefolk, and technically still commander of the Night’s Watch, teamed up with the now savvy Sansa Stark, along with Bran the mind-controlling warg / omniscient raven, and Arya the ruthless assassin who can change faces. They would be an unstoppable force that could rain down vengeance on their enemies. I get goosebumps just thinking about it. But with Daenerys and her dragons coming, Bran might want to practice warging out on something a little larger than Hodor…

What I love about this show is that you can really like a character and then have them do something you totally disagree with. Good people that do bad things. Bad people that do good things or have the occasionally pearl of wisdom. The story is full of multilayered characters that are complex and ever evolving. Theon Greyjoy is one such character. Theon was not a prominent character in the season finale, it even season six, but I felt he deserved an honorable mention. Despite some seriously bad decisions (chiefly, groping his own sister), I really like the guy. He betrayed the Starks, yes, but life also dealt him a Karmic blow and he has since atoned for his sins. Despite everything thrown against him, Theon has also managed to push through. Perhaps being raised with the Starks rubbed off on him, and that tenacity that makes Starks so hard to kill is part of Theon’s character as well. Deep down, I think Theon always considered himself a Stark, and he knows now that he made a horrible mistake when he betrayed them. I am curious to see how his story unfolds, and if he ever officially redeems himself in the eyes of the Starks.

I’ll just come out and say it. Dany’s is okay. She’s okay. She’s not awesome. I don’t hate her. But I don’t love her either. But you know what I always have loved? Her entourage! Say what you will about Dany, the girl keeps some good company.

Khal Drogo was a beast! That guys knew how to fight and I wish we got to see him past the first season. Jorah Mormont is an intriguing character who would go to hell and back for Dany, even after being banished by her twice and contracting greyscale. Sir Barristan Selmy, former Lord Commander of the Kingsguard, traveled half the known world to serve Dany and give the figurative bird to the Lannisters and he too could throw down. Then we have Greyworm, the leader of the unsullied who can kill two men with one swing of the dagger. Then we have the gorgeous Missandei who speaks like a million languages. And then we have Daario Naharis, leader of the Second Sons. A man who is so bad ass he can kill a charging horse with a quick throw of a knife and kill a man on horseback without breaking a sweat. Also in Dany’s ensemble are three fire breathing dragons. And of course let’s not forget the latest addition to Dany’s ever impressive cast – Tyrion Motherf**king Lannister.

While there are a great many characters in Game of Thrones, I think it is safe to say that Dany doesn’t make that list – at least not without her entourage. Finale the Highlight of Season Six

It’s my humble opinion that season six has been the slowest, and dullest of most of the seasons. Blasphemy, I know. Not that I thought S6 was bad, but prior to it I thought every season was progressively better than the one preceding it. Season six to me seemed to flounder and stagnate. The last two (or few) episodes salvaged the season for me.

Had it not been for Jon Snow kicking the shit out of Ramsey Bolton the entire thing would have been a miss for me. I don’t know which made me happier: Geoffrey pathetically choking and spurting to death in front of his own mom, or John Snow beating Ramsey Bolton half to death with a shield and his bare hands only to then have his face mauled off by his own dogs as Sansa smugged.

Lyanna Mormont spearheading the North’s rally around Jon Snow as the rightful King of the North was another show stopper to me. I am completely done in by Lyanna Mormont. She sold the season finale and season seven will not be worthy without her. I sincerely hope we get to see more of this little titan in future episodes.

Although Cersei is not one of my favorite characters by any stretch, I was delighted to see her enact vengeance against the High Septon and faith militant. I just really dislike that guy. You’d think because I dislike Cersei, and the High Sparrow basically tortured her and then parading her through the streets naked and humiliated that I would consider him the enemy of my enemy. But I suppose my disdain for religious zealotry overshadows it, and it did please me so to see him blown to green smithereens… even if… ya know… Cersei also killed everyone else in town.

All said and done, season six was a success. While not as fast as I would have liked – it took about 3 episodes to really get some traction – it was thoroughly enjoyable and tied up a lot of the loose ends we had on the heels of season five. Season six was maaaaaarginally better than season five and to me it was the finale and pre-finale that pushed me over the edge. And now we have to wait nine excruciatingly horrible months for season seven.

Will Dany’s ships land safely in Westeros? Will the North be able to fend off the army of white walkers at their door? Will Cersei go bat shit crazy and kill everyone? Will Samwell Tarly figure out how to make Valyrian steel? Will Bran and Arya ever team back up with their siblings? Will Sandor Clegane find peace? Will Theon Greyjoy find redemption? Will Jorah Mormont find a cure? Will Jon Snow learn who his parents are and fight for his rightful place on the Iron Throne?

Many questions abound. But we now know one thing for certain.