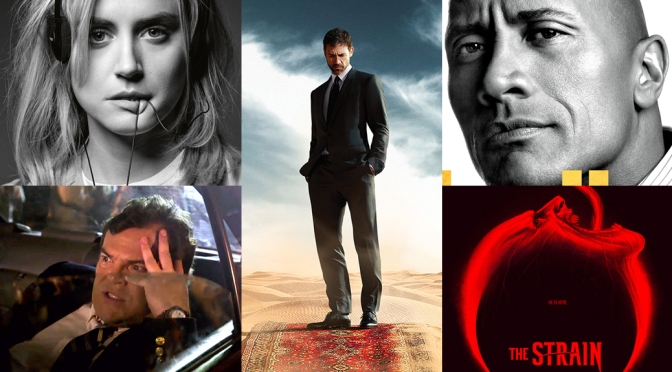 It has been a turbulent past 7 years in the realm of TV. We saw the rise (and fall) of some very notable and much applauded series. Sons of Anarchy, Breaking Bad, Justified, Dexter, Trueblood, How I Met Your Mother, Boardwalk Empire and other door buster shows started, soared to stardom, and ended though on very good notes.

With so many of the biggest names on TV now relegated to the dusty binge watching archives of Netflix and Hulu, one has to wonder, what is there to look forward to on TV these days?

Game of Thrones continues to get better and better with each season, and each episode. But with just two episodes left, audiences are about to have their favorite dish knocked rudely off the table. After that, it will take almost 10 months to cook up another serving of GOT. Likewise Gotham, Arrow, Flash and Supernatural are over. We’re doomed. Or are we?

I have not given up hope. It’s going to take TV providers some time to gain traction with new series and only time will tell what the next fan favorites are going to be, but here is what I am personally looking forward to in 2015.

Orange is the New Black (Netflix)

This show is truly like no other show on television. First of all it’s a Netflix series which means all the episodes are released at once for immediate binge watching pleasure. Another peculiarity is that the cast is almost entirely female, giving the show a much needed unique perspective and attitude.

Orange is already coming into its junior year and I am looking forward to a third serving of Taylor Schilling at the tenacious Piper Chapman as she scrambles to learn the ropes in the US Penitentiary System.

See Also: How ‘Orange Is the New Black’ Revolutionized TV

The show features such a wide range of characters that there is something for everyone. The show also stars Laura Prepon (That 70’s Show) as the femme fatale Alex Vause, Uzo Aduba as Crazy Eyes (no explanation needed), Natasha Lyonne (American Pie) as the scrapper Nicole Nichols, Kate Mulgrew as prison yard honcho Red Reznikov, and the gorgeous Samira Wiley as Poussey Washington.

The 3rd season will be released by Netflix on June 12, 2015, and this season while be one episode longer than the previous two.

Every episode of GOT this season on HBOGO featured a trailer for this new show Ballers coming to HBO.

It’s safe to assume I will give anything a shot if it has Dwayne Johnson (The Rock) in it. The guys is just cool as hell. I would love to see how The Rock performs when he is taken off the big screen and into the living room.

I don’t know much about the show, but from the trailers I have seen I imagine the show is about a former professional football player who is looking for new ways to grow his fortune. His ambition sends him on a wild journey of wealth, debauchery and crime which I am thoroughly looking forward to watching.

After all, who doesn’t want a piece of the American Dream? Grab a slice when Ballers premiers on June 21, 2015.

I think FX is the single best network on television these days when it comes to original series. Archer, Justified, Sons of Anarchy, Wilfred, in my book FX can do no wrong.

Following on the heels of these shows is Tyrant. Entering its second season, the show focuses on Barry Al-Fayeed (played by Adam Rayner), an expatriate, and son of a Middle Eastern tyrant of the country Abbudin, a fictional country mashup of Saudi Arabia and Iran. Barry returns home to help steer his family, the country they rule, towards democracy.

The show wasn’t particularly well received by critics, but I enjoyed it plenty. FX did grace it with a second season and I am looking for to seeing where the writers take the show in light of all the strife happening in the region currently.

Another FX show being granted a second season is The Strain, a fantasy-sci-fi horror series created by Guillermo del Toro and Chuck Hogan. Del Toro’s brushstrokes are all over the canvas of this show about a virus caused by vampires in a centuries old plot to dominate humanity. A rogue group of CDC doctors team up with a holocaust survivor, a gangbanger, and a pest exterminator to vanquish the vampire threat while the government fails to act.

The show is creepy, suspension, and has a fair amount of action. Most interesting is how the show blends the folklore with science and with history. The combination of Nazi occultism, ancient mythology and modern science makes for a fun cocktail.

With Trueblood gone and Game of Thrones approaching its offseason, HBO needed more than just one show to fill the summer void. In addition to Ballers, I am looking forward to another HBO franchise, The Brink, starring Jack Black and Tim Robbins.

Again, I am not fully versed on this show but it looks like Black plays a diplomat of sorts stuck in the armpit that is the Middle East in this comedic-action-packed-political steaming mess of a show.

Jack Black has been acting a long time and despite his popularity and name recognition, he’s always been somewhat of a B movie actor. Note, I didn’t say B actor, but rather an actor who is in B movies.

I am also looking forward to taking a peek at this show which also premiers on June 21, 2015.